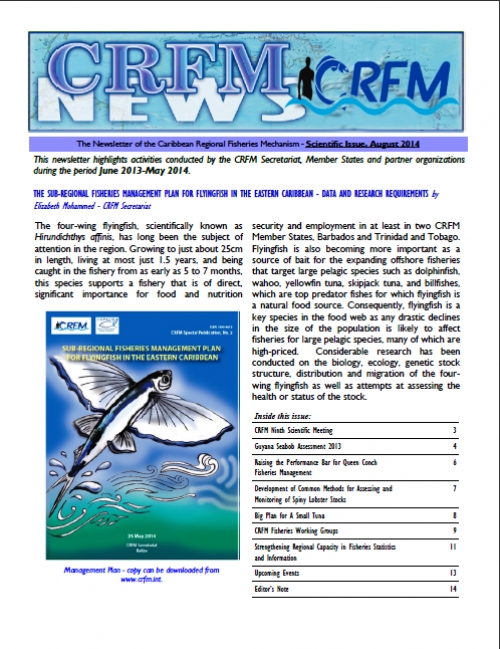 The four-wing flyingfish, scientifically known as Hirundichthys affinis, has long been the subject of attention in the region. Growing to just about 25cm in length, living at most just 1.5 years, and being caught in the fishery from as early as 5 to 7 months, this species supports a fishery that is of direct, significant importance for food and nutrition security and employment in at least in two CRFM Member States, Barbados and Trinidad and Tobago. Flyingfish is also becoming more important as a source of bait for the expanding offshore fisheries that target large pelagic species such as dolphinfish, wahoo, yellowfin tuna, skipjack tuna, and billfishes, which are top predator fishes for which flyingfish is a natural food source. Consequently, flyingfish is a key species in the food web as any drastic declines in the size of the population is likely to affect fisheries for large pelagic species, many of which are high-priced. Considerable research has been conducted on the biology, ecology, genetic stock structure, distribution and migration of the four-wing flyingfish as well as attempts at assessing the health or status of the stock.

More in this category: « Report of Workshop to Develop Strategy to Strengthen Capacity in the Area of Fisheries Statistics and Information, 10-12 February 2014, St. Vincent and the Grenadines
Login to post comments
back to top