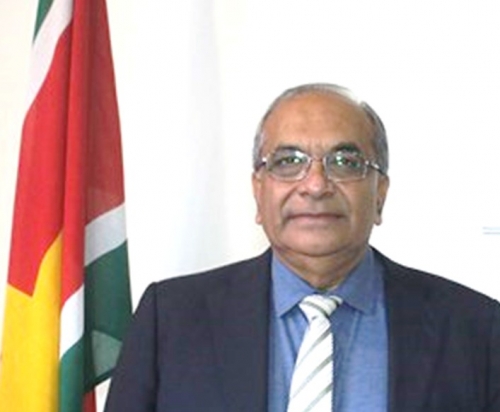 Before handing over the mantle of leadership to Suriname, the outgoing chair of the CRFM Ministerial Council, Hon. Saboto Ceasar, Minister of Agriculture, Rural Transformation, Forestry and Fisheries of Saint Vincent and the Grenadines, emphasized that whereas much had been achieved during the previous year, significant work remained to be done. He informed the meeting that at the 37th session of the FAO Regional Conference for Latin America and the Caribbean (LARC37) held in Ecuador in March 2022, the CRFM Member States reiterated the request to the UN Food and Agriculture Organization (FAO), for the deployment of the Norwegian Research Vessel (RV) Dr. Fridtjof Nansen, to conduct an independent marine resource survey  of the marine living resources in the waters under the jurisdiction of CARICOM States. During this 16th Meeting of the Ministerial Council, the Ministers reiterated the crucial importance of moving ahead with the research, as it would provide an invaluable evidence base to drive  informed blue economic development across the region, and expedite the region’s economic rebound and recovery from the adverse impacts of the COVID-19 pandemic on the fisheries and aquaculture sector, which is already beginning to show positive signs of revitalization with more fishers and vessels returning to sea. The Meeting also discussed other ongoing initiatives to strengthen capacity for evidence-based decision making, including the Iceland-funded CARICE Project and FAO/WECAFC-Fisheries Resources Monitoring System (FIRMS) partnership.

Hon. Parmanand Sewdien, Suriname’s Minister of Agriculture, Fisheries and Animal Husbandry, elected as the new chair of the CRFM Ministerial, presided over the deliberations. The Ministers received updates on several initiatives being implemented by the CRFM Secretariat and Member States in collaboration with regional and international development partners, in the context of the Third CRFM Strategic Plan, spanning 2022 to 2030. These include the US$48 million CAF-FAO-CRFM-GEF supported project on Promoting National Blue Economy Priorities through Marine Spatial Planning in the Caribbean Large Marine Ecosystem Plus project (BE-CLME+), which the CRFM hopes will commence later in 2022. The Ministers affirmed that this initiative could contribute greatly to the realization of the target set by the CARICOM Heads of Government at their meeting held during March 2022, to reduce the region’s overall food import bill of around US$5-6 billion by 25% by 2025.

Additionally, the Ministers discussed initiatives which the CRFM and its Member States are undertaking to address the Sargassum inundations that have been affecting the region, including efforts to explore opportunities, through a partnership with New Zealand, to safely harvest Sargassum for the development of products that would enhance the region’s economic and climate resilience. This is being pursued under a three-year project, spanning 2021 to 2023, funded by the New Zealand Ministry of Foreign Affairs and Trade (MFAT) and implemented jointly by the New Zealand Institute for Plant and Food Research Limited (PFR) and the CRFM.

The Ministers also dealt with the vital need for strengthening the region’s access to international markets, through enhancing fish and seafood quality and safety, with enhanced sanitary and phytosanitary (SPS) measures. The CRFM Secretariat and the Inter-American Institute for Cooperation on Agriculture (IICA), through the 11th European Development Fund SPS Project, continue to work with Member States and the private sector to build their trading capacity, thereby also contributing to the wider goal of slashing the region’s import bill over the next three years. They also considered the progress of the ongoing negotiations at the World Trade Organisation to prohibit the provision of certain fisheries subsidies that contribute to illegal, unreported and unregulated (or IUU) fishing and overfishing.

The Ministerial Council gave the greenlight for the CRFM Secretariat to work with development partners to facilitate knowledge and technology transfer for integrated multitrophic aquaculture—which enables cost-effective and environmentally friendly expansion of aquaculture, including mariculture. The Ministers also welcomed positive news on the progress of activities under the Japan-funded COASTFISH project, which builds upon a previous Japan-funded co-management project in the region, which has strengthened the conservation, management and sustainable use of coastal marine resources through greater involvement of fishers and coastal communities.

Trinidad and Tobago, represented by Minister in the Ministry of Agriculture, Land and Fisheries – Senator the Honourable Avinash Singh, was elected as vice chair at the meeting and is, therefore, next in line to assume the chair of the CRFM Ministerial Council in 2023, when the CRFM will commemorate the 20th anniversary since its launch with a series of activities that the Ministers approved during this 16th Meeting of the Council.

The CRFM Executive Director, Milton Haughton, said that this was a very productive meeting. He noted that the Ministers recognized the urgency of addressing the challenges facing the sector and made several decisions that will contribute to a more sustainable, resilient, and productive fisheries and aquaculture sector and ultimately to improved national and regional economic growth, food security and nutrition, livelihoods and well-being of the people of the region.

More in this category: « CRFM Member States participate in 7th Meeting of OACPS Ministers in Charge of Fisheries and Aquaculture in Ghana CRFM congratulates Saint Vincent and the Grenadines on the celebration of its 45th National Fisherfolk Day »
Login to post comments
back to top